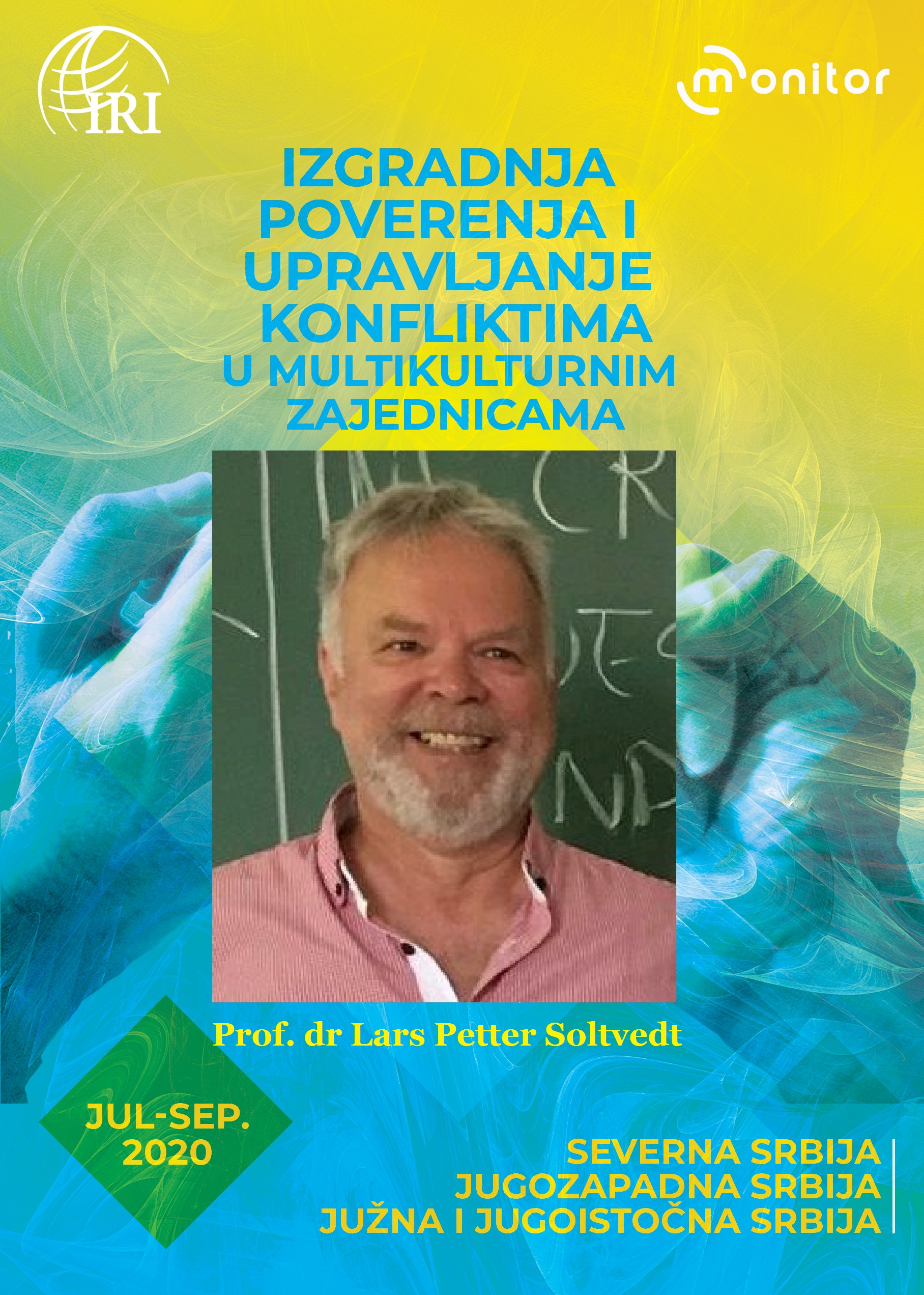 Developing trust and a belief in human rights for all, everywhere in the world

After completing my PHD in international relations and peace research the University of Michigan in 1998, I returned to Norway and initiated together with the Norwegian Helsinki Committee and the Municipality of Drammen, a study in human rights, multiculturalism and conflict management. At the same time, at a UNESCO CONFERENCE in Paris, a Norwegian delegation from the Ministry of Education, realized that in Norway, at Norwegian Universities and other institutions of higher learning, there were none or very few studies of Peace or peace related studies, and absolutely no recognition of the role of the university itself in the building or keeping of peace. This in spite of Norway having an excellent peace research institute in Oslo, and the fact that Norway for close to a century had been awarding the Nobel Peace Prize to worthy international champions of peace.

Reconciliation, however, does not always render justice – nor peace. A good example may be Bosnia-Hercegovina, where one may say that the war continues. Admittedly, with other means. Economic means, political means and cultural means. Another example may be South Africa. There, a truth and reconciliation commission temporarily saved the peace during the transition from Apartheid to Democracy in the 1990s. Today, however, South Africa is one of the most violent societies in the world. During the period 1995-2005, close to 200 000 persons were killed as a result of violent crime. Today, South Africa has been described as a country at war with itself.

In some places, peace seems to be contingent on other, external factors that make reconciliation impossible. Keeping the situation in the Middle East in mind, were it not for the strategic interests of such powerful states as the US and Russia, the constant and flagrant violations of International Humanitarian Law have been allowed to continue.

Harvard, one of the greatest universities in the world, adopted already in 1643 the word Veritas, which is Latin for “truth.” Students and faculty are supposed to achieve excellence through the pursuit of a greater truth. In the classroom as well as outside of the classroom. Extracurricular activities are meant to expand the students’ minds through observation, experience and reflection. Last year, the University of Southeast-Norway took students to Rwanda. We have visited Palestine on several occasions. Next year we will once again travel from Pristina through Serbia and Bosnia-Hercegovina to Dubrovnik. We take our students from the classroom and into the real world – in attempting to bridge the gap between theory and practice. For the students to observe and later to reflect – perhaps on what may be the role of the university in the keeping of peace. What may be the role of myself in promoting and perhaps sustaining peace? In respect for human rights. In multicultural society where conflict so easily arise. How may I apply in my own local environment – at home or abroad, techniques and methods to manage or transform conflict?

Rebecca, one of our students on one of our trips abroad, wrote “Srebrenica was so beautiful. Blue and yellow flowers were asking for our attention – between white monuments and names written in stone. The names of 8000 individuals – victims of genocide!

Another student of mine Mohamed from Somalia wrote “War used to be part of my life. In Srbrencica everyone was crying, but not me. I want to go home and save my country!”

At our study of human rights, multiculturalism and conflict management, that our University has been offering since 2000, students move back and forth on the bridge between their own professions and our classroom. The students come with professional background and experience from the armed forces and the police. They come as teachers or social workers. They work with immigrants and refugees. They come from Iran and Iraq. From Afghanistan and countries in Africa. Out of the classroom, at home or at work, they contribute to fulfill perhaps the most important role of the University today – the encouragement of inclusion and tolerance. The building of trust towards each other. To contribute to the peaceful management of conflict in multicultural society, with insight and respect for human rights.

I believe the work of Monitor, in my understanding of your operationalization of my ideas – to encourage tolerance and inclusion through activism and education, is what is needed to build peaceful societal relations. In contextual and normative terms, trust may be seen as a concept in which individuals contribute to building institutions and a culture of trust. Moral guidelines and societal traditions lay the foundation for citizens’ trust in each other. Overall goals count more than individual interests, so that interpersonal trust within all entities in society becomes an end in itself. Such confidence may lead to the development of social conditions, attitudes and actions which in turn form the basis of peace, security, cooperation and development. Trust may also be considered as social capital, which can be measured in the moods and sentiments of members of society towards political, cultural and economic development. Since every society evolves throughout history (generation for generation), it involves attitudes towards both the past and the future.

Trust and confidence begins at the individual level, in the classroom as well as outside of the classroom.  Here it is what Knud E. Løgstrup writes about trust: „We basically believe in each other’s words, we basically have confidence in each other. It may be remarkable, but it belongs to human nature. We would simply not be able to live, our lives would wither and be stifled if we initially met each other with distrust, expecting the other to steal and to lie!”

Confidence in one’s self, in other people or in groups of people, to the state and even to the international community is destroyed in all wars. In a post-war period, „the social suffering“ and the existential uncertainty continue as long as one does not once again achieve a satisfactory level of trust between former enemies. It is a prerequisite for being able to rebuild human relations and may be considered „community glue“ that illustrates how dependent one is on one another. Without trust, without relationships, you never get the interaction that is needed for peace, reconciliation and social development.

On the other hand, distrust prevents the communication that could build trust between people. Continued mistrust of each other in a society that has come out of war and conflict reinforces human negative prejudice and stereotypes against other people and groups of people. Forces that in a society are used for „control“ of those you do not trust, increase the price of reconciliation. Mistrust or a low level of trust ultimately has the potential to influence societal and individual goals in a very negative way, and thus the belief that the ultimate goal – reconciliation – is not at all possible. However, if there is trust between people, the cooperation will be far more effortless, have lower „costs“ and produce much better results.

Building trust in a society that has been at war is a deliberate regulation of dependence between past enemies. Here, trust represents the will from one side – shown through purpose and behavior – to make itself vulnerable to the other side because it believes that the other side is well-meaning, to trust, is honest and receptive to positive attitudes. At the middle class level, there is a collective understanding of a group that the other group should be honest, fulfill their duties and not abuse others. Confidence develops through a societal interaction and the risk that previous enemies may take in trusting “the other”.. It opens up opportunities to build trust when people become aware that they can benefit from this interaction in society and decide to seize the opportunity. When this benefit is confirmed, they dare to bet a little more, go one step further. How to develop the relationships until a new relationship of trust has been established …

In this context, it is necessary to have confidence in institutions that keep society together and make it work and develop. In post-conflict communities, this confidence is usually at a low level (or at an unrealistically high level if one has long wanted a change in the management system). It is therefore often one of the authorities’ main tasks to recreate confidence in themselves and “their” institutions. Relevant institutions can be, for example, the educational system, the media, the police, the defense system, the judiciary, the parliament and public service.

Where there is distrust of institutions, mistrust also tends to develop between people. This mistrust can be „institutionalized“ and become part of the culture in a negative way. Citizens’ trust in state institutions is one of the strongest that a community can build on. This also lays the foundation for peace, stability, efficiency in the management system, for the integrity of society, for a fair distribution of public goods and for economic development. It is also the foundation for both the individual and the nation’s health, for optimism, for the education of the population and for people.

For where there is distrust of institutions, mistrust also develops between people. This can be „institutionalized“ and become part of the culture. Citizens’ trust in state institutions is the strongest glue that that binds members of society together. This also provides the foundation for peace, stability, and efficiency in the political and institutional management system It is also the foundation for both the individual and the nation’s health, for optimism, for the education of the population and for the people to participate in and contribute to the organization of civil society.

In post-conflict societies, civil end educational institutions are the most active in establishing arenas and mechanisms that will lead to the reconstruction of trust and reconciliation. In building bridges between the past and the future. I believe the work of Monitor in gathering information on trust and mistrust between individuals and different parts of society, will be an important building bloc towards a more sustainable period of societal peace in Serbia. Theoretically, your work may also provide important information on the relative importance of different factors in building confidence and societal peace in conflict- ridden societies, more generally. 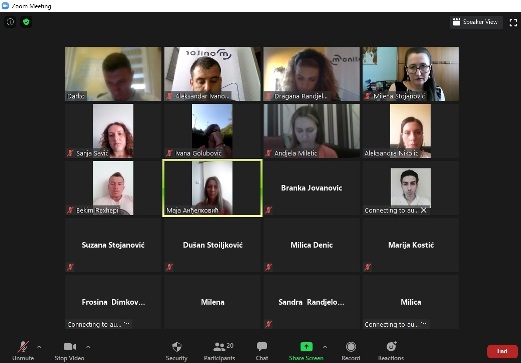 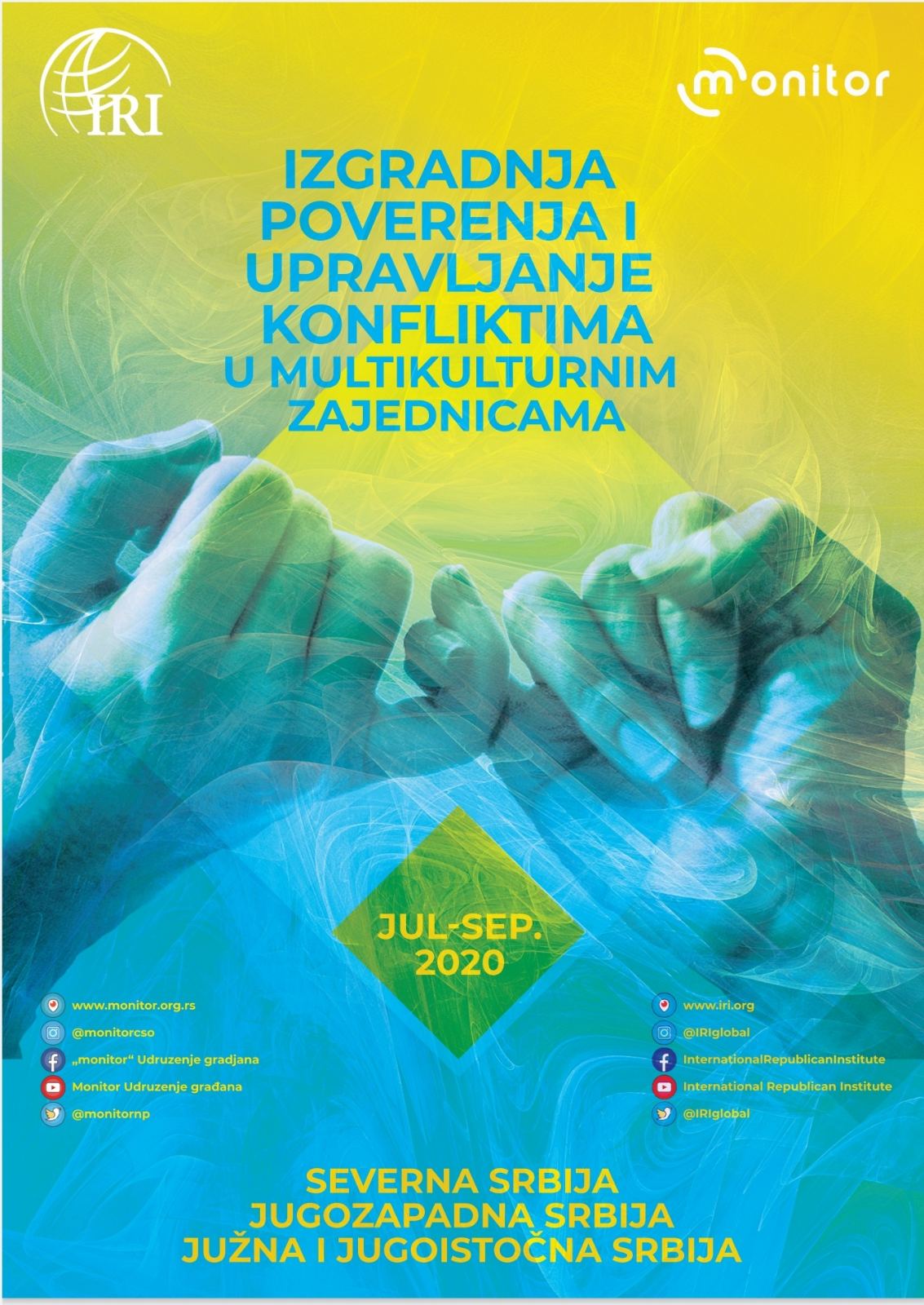